VietLaoKhmer and the Bandung Reading Group were originally reading independent of each other before deciding to work together on an event addressing American imperialism in Asia and how it has affected generations of immigrants in America. It is uncommon for these two struggles – that of the Korean people and the peoples of Vietnam, Cambodia, and Laos — to be compared and brought together as interconnected struggles for self-determination. However, we discovered one journalist who dedicated his life's work to uncovering the truth of both the Korean and Vietnam Wars and connecting these peoples' struggles — Wilfred Burchett. Amidst the thick propaganda that envelops us today, Burchett's prolific, diligent, and oft-hidden work, written with a sense of Asian peoples' dignity, has been integral to our study as young people who want to know the truth of what happened to Asia at the hands of America. We wish Burchett could know how impactful his life's work has been in showing us what principled unity could look like between all people interested in the truth, peace, and real democracy. We hope to honor his journalism through our event and by sharing his life here. 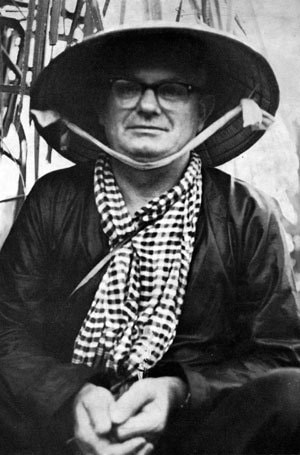 Australian journalist Wilfred Burchett (1911-83) is posthumously renowned today but spent much of his life and career demonized and punished as a “traitor” to his home country for exposing the truth of the anticolonial struggles across Asia. Burchett dedicated himself to writing about the world’s oppressed peoples and their revolutionary struggles, especially in Asia, from a perspective of solidarity, shared humanity, and in pursuit of the truth. To this day, it is because of his meticulous and principled journalism that generations of people will be able to uncover the truth of what America and the West did to suppress Asia’s freedom in the second half of the 20th century.

One of the first Western journalists to cover the devastation and radiation sickness of Hiroshima days after the dropping of the atomic bomb, during WWII, he went on to cover the Korean War, the Vietnam War, the Cambodian and Laotian struggles for liberation, and more — always from the side of the people and often behind the so called “enemy lines,” so that ordinary people from the West could know the truth of these US government’s role in suppressing these people’s struggles around the world. He developed longstanding friendships with Ho Chi Minh, Fidel Castro, Kim Il Sung, Zhou Enlai, Prince Sihanouk of Cambodia, and many other leaders of these people’s struggles, who granted him many hours of interviews and enduring support as the West sought to suppress his work and capacity to travel and carry out his reporting.
​
Burchett was ruthlessly persecuted and smeared for seeking and sharing the truth about the destruction of Asia at the hands of Western imperialism. The US and Australian governments discredited his reports of atrocities committed during the wars, calling his journalism Communist propaganda. In 1955, the Australian government denied Burchett his passport, which prevented him and his children from entering their home country for decades. He was unable to attend his own father’s funeral in Australia in 1969. Eventually Burchett became a citizen of Vietnam.

For a large part of my professional life I have watched wars waged in Asia… I followed the trail of wrecked cities and burned villages through most of Asia and the Pacific area during World War II. Until the blood-soaked trail led to Hiroshima…There at least one thought it would end. But it soon started up again. I saw more than a fair share of blood and tears in those wars… On questions of war and peace, it is difficult to be impartial and dispassionate. [My book] sticks to carefully verified and verifiable facts that throw light in dark places in… Asia… If [my reporting] contributes to finding the end of the war trail in Asia, then [it] has served its purpose.” (The Furtive War: The United States in Vietnam and Laos, 1963)

In the Korean War, he made a two-year visit beginning in 1950 to north of the 38th parallel of the Korean war. There, his research, interviews, and field visits led him to uncover and accuse the US government’s perpetuation of unbridled, genocidal massacres, bombings, and germ warfar against Koreans, especially of villages and civilians. His writings from this period are compiled in This Monstrous War (1953). When he was invited to return to North Korea in 1967 at the request of Kim Il Sung, he was thoroughly impressed by the immense progress that the North Korean people had made to rebuild their society, industry, and state, brick by brick, after US military intervention had bombed nearly all structures in the north to rubble and killed millions of civilians throughout the period of the war.

As the US war efforts ramped up in the Indochina region in the 1960s, he could not help but see the connection between the US military’s tactics of provoking and carrying out a devastating war against a formerly colonized people in the Korean peninsula in the 1950s, and its efforts to justify and wage war in Vietnam and in Southeast Asia in the 1960s.  “Was Vietnam to become a second Korea?” he asks, in Again Korea (1967). His visits to Southeast Asia began when he covered the First Indochina War of liberation from French colonial forces in the 1950s, being present for the victory of Vietnamese and Indochinese forces at Dien Bien Phu, during which he met and interviewed Ho Chi Minh — the start of a lifelong friendship.

We can all be inspired by the life and work of principled journalists like Wilfred Burchett for their moral commitment to peace and liberation of oppressed people, as well as their denouncement of the Western war and imperialist agenda of their times. It is no wonder that truth-speaking and politically persecuted journalists of today, like Julian Assange, have cited Burchett as one of their leading role models as inspiration for their courage to speak out against the Western capitalist imperialist consensus. Their examples, often erased or censored in the West, inspire us to align ourselves with the rise of Asia and a multipolar world today, and commit ourselves to seeking the truth as a new Cold War unfolds and the global influence of the West declines.

History repeats itself but the balance of forces change... It may well be that history will record that the issue of a third World War or world peace was settled in the shell-pocked mountain ridges of Korea. Whatever the historians record of this period, the peace-loving peoples of the world can never adequately repay their debt to the heroic Korean people who held the front line against the storm-troopers of the aggressors in what was intended to be the opening round of a new world war.” (This Monstrous War, 1953)

​This is a non-exhaustive list of Wilfred Burchett's writings on Asia that the VietLaoKhmer and Bandung groups have studied.